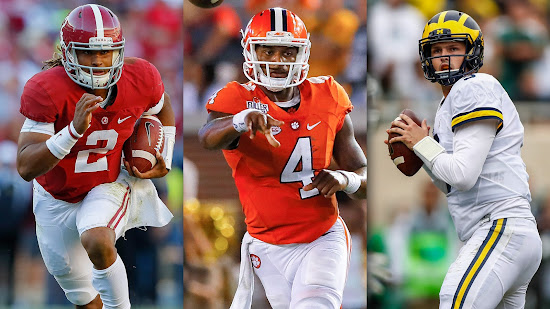 The first college football playoff poll of 2016 was revealed on Tuesday night, which garnered quite the reaction from fans across the country. Now, this is just the first one of a weekly poll that culminates on December 3rd, meaning that this poll has practically no bearing on how the playoff seedings will play out. But even though it is currently a meaningless poll, the rankings always get super analyzed and broken down as they create a huge buzz going forward.

I'm normally someone that stays away from hot takes, especially when dealing with a poll that will most likely not look anything like the final product. But what the committee did, or why they are doing it, was too egregious for me to not touch on here. I saw the rankings, sent some texts out about how incredibly ridiculous one ranking in particular was and then stewed for the next day trying to figure out how to justify it and give the committee the benefit of the doubt. I couldn't, because there's no justifying it.

Let's start with the rankings, and what they got right. Alabama is ranked #1, and that is almost universally agreed upon. They are undefeated and have been steamrolling teams this season, they look so good that I've heard some fans of other playoff teams openly talk about how they want no part of playing the Crimson Tide this season. And I know that program stability and previous years shouldn't play a factor, but it's hard to overlook Alabama's program and being the defending national champs as more reason to have them as the top team in the playoffs. 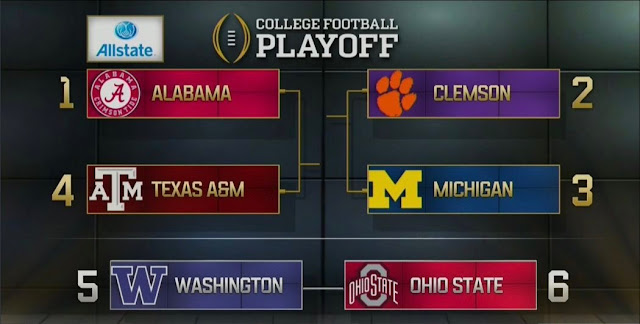 Clemson came in at #2, while Michigan came in at #3. Personally I would have them flip-flopped, but it really splitting hairs over something that doesn't matter. The #2 and #3 seed will play each other on a neutral field in the college football semi-finals so whether Clemson is #2 and Michigan is #3 or vice versa won't change anything. They will play each other with no home field advantage, so no reason to debate here.
Then the #4 ranking was revealed, and myself along with many other college football fans couldn't make sense of it. Texas A&M is ranked #4, meaning they are currently the last team in the college football playoff. It was a stunning move, but not at the same time because college football is known to make such terrible choices with rankings that it becomes more laughable than infuriating. 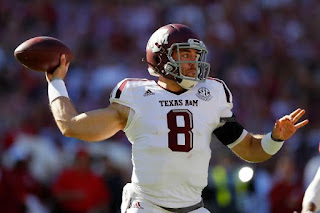 Texas A&M practically has zero chance of even playing for the SEC title this season, which means they will have no shot at remaining in the college football playoffs. Why even waste time putting them in knowing full well that there will be no way to justify them going forward? They are 2 games behind Alabama in the SEC West(1 game back and the tiebreaker), so they would have to run the table and hope that Alabama loses 2 of their final 3 conference games just to get a shot at the SEC title. In that very unlikely scenario topped off by them winning the conference title game, then they are more than qualified to get into the playoffs, but aside from that then there's no way of putting them in the top 4 when the final rankings are released. 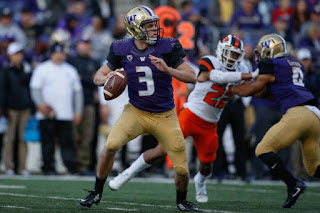 It's not only that they are ranked at #4 with no real chance of staying there or moving up, but it's also about the teams directly behind them, starting with the Washington Huskies who came in at #5. Unlike the Aggies, Washington is undefeated and doesn't need another team to fail in order to win their conference. They are in the driver's seat as long as they continue to win and an undefeated team atop a power 5 conference should always outrank a 1 loss team that needs help to win their conference. Most fans seem to agree, Washington is a clear cut choice for the #4 seed instead of Texas A&M. 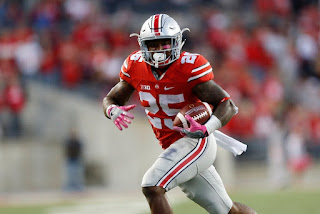 Then at #6 are the Ohio State Buckeyes. The Buckeyes have also suffered a loss, and Texas A&M's loss was to a better team, but here's the kicker; Ohio State controls their destiny. OSU lost by 3 at Penn State, who is currently ranked 12th, so while it's a worse loss than Texas A&M's loss to Alabama, it's still a forgivable loss. Add in that if Ohio State wins out then they will be headed to Indianapolis to play for the Big Ten title while the same cannot be said for Texas A&M. I know I keep going back to that point of winning a conference championship, but it's reason to show that Ohio State has a greater inside track at being granted a playoff spot than Texas A&M does. 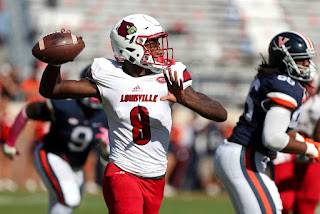 Louisville ranks at #7, where I feel the Aggies should be ranked. This is more of a compare/contrast with these two teams since they have very similar paths going forward. Louisville is also 2 games behind in their division due to a loss to undefeated Clemson so neither controls their own destiny. Louisville lost at #2 Clemson and Texas A&M lost at #1 Alabama, so a very slight edge goes to the Aggies here. it all comes down to this though, Louisville lost by 6 after they failed to score a touchdown inside the red zone in the final seconds of the game and Texas A&M was dismantled 33-14 by Alabama. It's close, but the only real difference is margin of loss and that heavily favors Louisville in this case, so even if the college football committee was going to let a 1 loss team that didn't win their conference title then they have currently selected the wrong representative.

Texas A&M is ahead of an undefeated team, an Ohio State Buckeye team that controls their fate in the toughest overall conference and a Louisville team that is a mirror image of the Aggies but with a "better" loss. That's the gripe I have with TexasA&M being ranked #4, but really my gripe is with the committee's idea of "fun."

In the previous 2 years, they've also pulled this stunt where they toss a wildcard in the mix all in the name of ratings and sparking conversation. Whether it's ranking 3 teams from the same conference in the top 4 or ranking an undefeated team out of the playoffs and so on, they always seem to focus on that one attention grabbing ranking that gets people up in arms over. So maybe I'm a fool for falling for this, or maybe it's just because I don't care for the committee treating this like it's their own reality show that needs to shock in order to get some attention. College football sells itself, and I'd rather them just have a boring, predictable ranking show from week to week where everyone can break down what each playoff eligible team needs to take care of to ensure their spot in the final 4. Or not do one at all this early, 5 weeks is way too early to really analyze these rankings and their desire to use this as their personal spotlight seems to upset more fans than anything.

How do I know that the committee is just playing along these reality TV show lines and doing things just to get talked about? Because in the 2 years that the playoffs have been around, they have gotten the final 4 right both times. When it comes down to crunch time, the committee all of a sudden figures it out and goes chalk to what practically everyone believes are the rightful 4 teams. And it will happen this year, if Texas A&M continues to win then the committee will dangle the possibility around of them getting in over an undefeated Washington team or a potential Big Ten champion, then the Aggies won't even be in the top 6 or so when the final rankings are released and we will all agree that the committee got it right.

Each week I will continue to hope that the committee stops acting like these rankings are about them instead of the college football teams, and each week I'll more than likely be let down.
Posted by Unknown at 10:00:00 AM