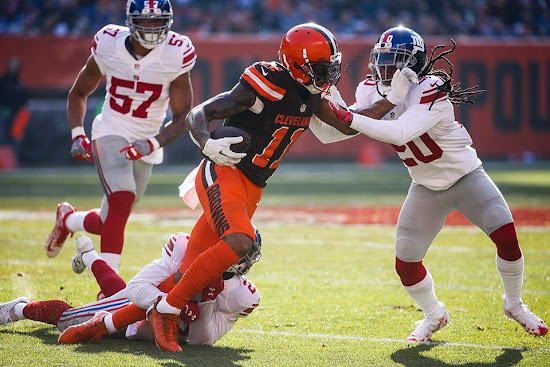 
The Cleveland Browns are now 0-12 after losing to the Giants 27-13. This game was an odd game. The defense played well for most of the game but seemed to have run out of gas at the end.  But the offense struggled all game only managing 13 points, turning the ball over three times and allowing Josh McCown to be sacked seven times. 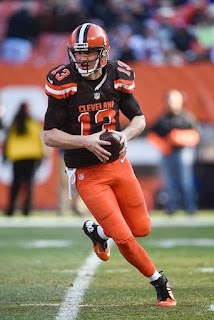 Josh McCown played like he usually does. Keeps the team in the game but makes a mistake at an important moment. McCown was 25/43 for 322 yards, a touchdown, and two fumbles (including the one that was returned for a score.) That fumble was a rally killer considering a few plays before that McCown found Terrelle Pryor deep for 54 yards.

The running game was held to 58 yards on 21 carries. Isaiah Crowell and Duke Johnson couldn't get anything going, both only averaged 2.8 yards per carry. But both did play well in the passing game. Crowell had six catches for 47 yards and Johnson had three catches for 26 yards. *Crowell had a fumble which resulted in the other score. That was Crowell's first fumble since 2014. 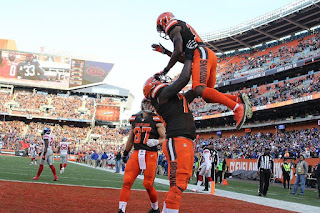 The passing game was average. It seemed like the Browns wideouts couldn't get separation for the Giants DBs. Terrelle Pryor was the Browns leading receiver with six catches for 131 yards. *Pryor's third 100+ yards game this year. Also first Browns player to have five + catches in five straight games since Kevin Johnson.  Outside of Pryor the passing game was headlined by rookies. Corey Coleman and Seth DeValve had three catches each. And one of Coleman's receptions was a 21-yard catch for a touchdown. Rashard "Hollywood" Higgins caught two passes for 34 yards.

The offense struggled but it was nice to see the rookies play well and show some growth. Terrelle Pryor was the offensive MVP for the Browns today. The guy show a will to win and does as much as he can to keep this team in games offensively. 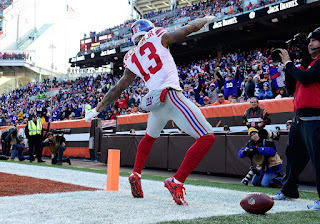 The defense didn't play bad but they couldn't force any turnovers. (The one turnover by the Giants was on special teams) Eli Manning only threw for 194 yards on 15/27 passing, but he did throw three touchdowns. Two of them were to Odell Beckham Jr. who had six catches for 96 yards. Outside of Beckham the Giants leading receiver was Victor Cruz who had a catch for 37 yards. Three guys had two catches each which was is tied for the team lead.  The Giants running game was solid totaling 104 yards on 27 carries. Rashad Jennings was the leading rusher with 55 yards on 15 rushes. 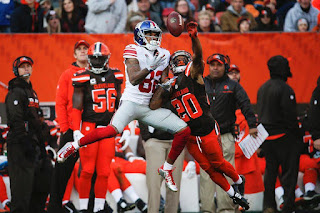 Today the young guys showed up for the Browns, not just on offense but defensively too. Christian Kirksey was all over the field racking up 11 tackles including one tackle for a loss. Briean Boddy-Calhoun played extremely well too. Matching up against Victor Cruz and Rodger Lewis most of the game. Boddy-Calhoun had four tackles including one for a loss and two pass deflections. Danny Shelton is another young defensive player who played extremely well. He set the line of scrimmage really well, played the run game well, and overall set a great tone for this game.

Special Teams got lucky twice. Beckham Jr. had two punt returns returned for big yardage, including one that was returned for a touchdown, but they were cancelled out by flags on the play. Other than that the coverage team didn't play that well. Yes, they recovered a fumble but it was because of the returner Bobby Rainey.

The Browns played well enough to win this game but they came up just short, once again. It will be interesting to see how they play when Robert Griffin III gets back under center. But the rookies and young guys played really well and it should be something they can build upon going into the bye-week and the stretch run. Most Valuable Brown: Two players get the MVB this week. Terrelle Pryor and Christian Kirksey. Both have shown immense growth from the beginning of the year and this game showed off their growth. Kirksey with 11 tackles and Pryor with his third 100+ yard game of the year. Both are making an argument to be named pro-bowlers at their respected positions.
Posted by Unknown at 9:00:00 AM