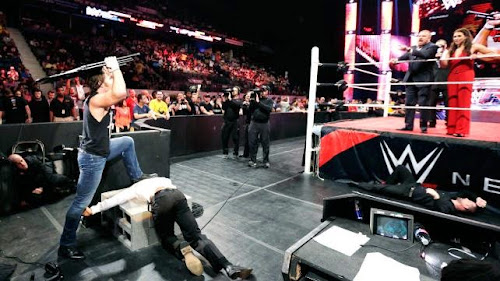 Wrestling Lockup with Brandon, brought to you by Triple Threat CLE.  It's time for this week's RAW recap.

- RAW was live this week in Richmond, Virginia. 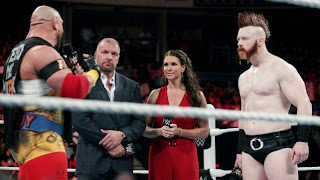 - Triple H and Stephanie McMahon are in the ring, kicking off RAW. Triple H and Steph brag about Seth Rollins winning last night, reveal the now vacant WWE Intercontinental Championship, gloat about being right about Daniel Bryan and how they need a durable champion. Sheamus interrupts and lays claim to the I-C Title, cause he's the one that injured Bryan. Ryback interrupts and says Sheamus should pick on "Big Guys" like Ryback. Steph announces Ryback and Sheamus will be two of the six in the Elimination Chamber for the I-C Title. Triple H announces Ryback and Sheamus will fight now. 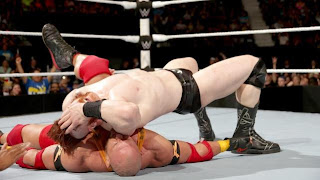 - Sheamus vs. Ryback: Ryback press slams Sheamus on top of the announcers table. Back in the ring, Ryback sends Sheamus into the corner. Sheamus fakes an eye injury and then pokes Ryback in his eye. Sheamus hits the "Brogue Kick" and scores the pin. 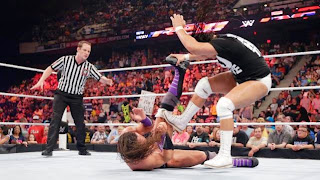 - Neville is in the ring, but gets cut off by Bo Dallas. Dallas says Neville's career is looking up but he doesn't "Bo-Lieve". Neville reminds Dallas he beat him once for the NXT World Title. Dallas swings at Neville, but Neville ducks and sends Dallas to the floor.

- King Barrett vs Neville: Neville goes for a springboard, but injures his knee. Barrett capitalizes on the injury and hits Neville with the "Bullhammer". Barrett covers and scores the pin. After the match, Bo Dallas attacks Neville. Dallas stomps on Neville's injured leg and slams it into the ring post, twice.

- Rusev is in the ring and says there is no Lana tonight, he never quit last night, he made John Cena pass out and he wants a rematch. Lana interrupts and says Rusev is misunderstood and Rusev in fact screamed he quit in Bulgarian. They argue back and forth until Rusev orders Lana to leave because it's all about "him" not "them".

- Dean Ambrose vs. Bray Wyatt: Bray hits a clothesline for a near fall, then goes for a senton splash. Ambrose dodges the senton as Mercury and Noble hit the ring. Mercury distracts the referee allowing Noble to shove Ambrose at Bray. Bray catches Ambrose and lays him out with "Sister Abigail". Bray covers and scores the pin. 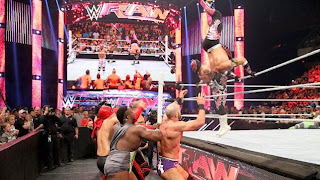 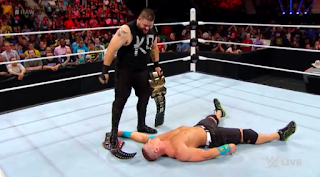 - John Cena is in the ring. Cena talks about retaining his WWE United States Championship at Payback and is here to continue the U.S. Open Challenge. The NXT World Champion, Kevin Owens, interrupts. Owens talks about how he hurt Sami Zayn, will beat Zayn at Takeover and refuses veteran advice from Cena. Cena says looking at Owens, he sees a scared kid and if he has a problem they can go right now. Owens says the day he fights Cena will be on his terms. Owens hits a cheap shot kick to Cena's gut and lays Cena out with the pop up power bomb. Owens holds up the NXT World Title and steps on the WWE United States Title as Cena lays motionless. 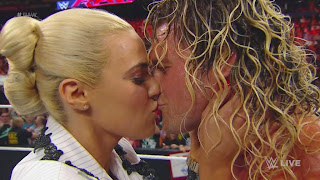 - Dolph Ziggler vs. Stardust: Ziggler counters "Dark Matter" and finishes Stardust with the "Zig Zag", scoring the pin. After the match, Ziggler cuts a promo and will be in the Elimination Chamber for the WWE I-C Title. Lana makes her way to the ring and kisses Ziggler. Rusev hits the ring and attacks Ziggler. Rusev yells at Lana for kissing Ziggler and Lana slaps Rusev in the face. Rusev corners Lana, but gets laid out by Ziggler with the "Zig Zag". Ziggler and Lana leave together. 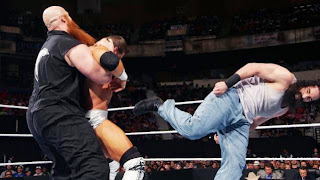 - Luke Harper and Erick Rowan vs. Fandango and Zack Ryder: Ryder gets some offensive strikes in. Harper plants Ryder with a swinging side slam. Harper lands a superkick on Ryder and Rowan follows with the full nelson slam and scores the pin. 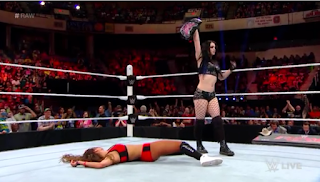 - "WWE Divas Championship Match": Nikki Bella (c) vs. Naomi: Nikki has Naomi set up for "Rack Attack", however, Tamina Snuka lands a super kick on Nikki, DQ'ing Naomi. Paige returns to the WWE and hits the ring. Paige chases off Naomi and Tamina, helping Nikki. Paige then lays Nikki out with "Ram-Paige" and poses with the Divas Title.

- Backstage, Kevin Owens announces he has a WWE United States Championship Match against John Cena at Elimination Chamber. Owens vows to do to Cena the same thing he'll do to Sami Zayn at Takeover. 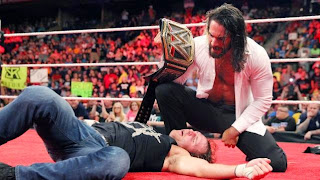 Ambrose dumps Rollins over the announcers table and reveals a pile of cinder blocks. Ambrose puts Rollins' head on the blocks and threatens to crush his head with a chair unless he gets his title shot. Stephanie finally agrees to the match and Ambrose unloads some more on The Authority. Kane gets the upper hand on Ambrose and The Authority beat Ambrose down in the ring. Rollins lays Ambrose out with the "Pedigree" and celebrates to close out RAW.
Posted by WrestlingFan78 at 11:00:00 AM