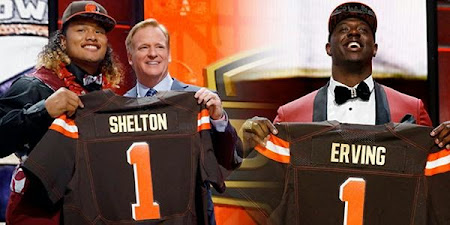 The Cleveland Browns came away with 12 new players during the 2015 NFL Draft this past week.  Each player filled a need for the team and, in many ways, upgraded those positions drastically.  Here is the final list of new players: 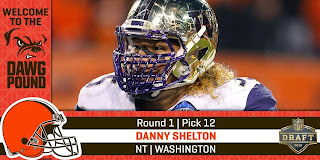 Danny Shelton, DT, Washington
1st Round, #12 pick overall
Danny came in to the draft as the second best DT next to Leonard Williams.  At 339 pounds, he is exactly what the Browns need to try and plug up their run defense which was, yet again, horrific last year after Phil Taylor went down with injuries.  The Browns will see if he does live up to the Halata Ngata comparisons. 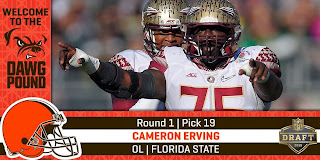 Cameron Erving, C, Florida State
1st Round, #19 pick overall:
The Browns went in to meltdown mode on the offensive side of the ball last year when Alex Mack went down with a broken leg.  Which is why they drafted the versatile center who played left tackle in 2013.  Projected to play right guard in 2015, he should have no problems transitioning to center if/when Mack opts out of his contract after this season.

Nate Orchard, OLB, Utah
2nd round, #51 overall
Orchard led the nation in sacks with 18.5 for the Utes.  He was projected to play in a 3-4 defense as an OLB pass rusher which should be a perfect fit for him to take over as Jabaal Sheard's replacement.  He'll join fellow Ute alumni Paul Krueger as the Browns look for more sacks in the coming season.

Duke Johnson, RB, Miami.
3rd round, #77 overall
After losing out on getting Chris Conley from Georgia when Kansas City traded in front of them, the Browns selected Johnson, who's excellent vision and good hands will give the Browns a complimentary weapon in the backfield if not their new starting RB in 2015.  He left Miami as a their all time leader rusher with an average of 6.69 YPC during his 3 years.  He will also see time as a return man on special teams if not their new punt returner.

Xavier Cooper, DT, Washington State
3rd round, #97 overall
The Browns traded picks to the New England Patriots to move back up in to the third round and select Cooper who was a possible pick for the Cincinnati Bengals at #99.  Cooper brings in the potential to be a disruptive pass rusher as he had 11 sacks last season.  He's a former TE and basketball player who has quick feet and excellent hand technique.  He should fit in perfectly with what the Browns are looking for as a rotational defensive end.

Ibraheim Campbell, S, Northwestern
4th round, #115 overall
Looking to upgrade the safety position as well as an heir apparent to Donte Whitner, the Browns took Campbell as their first fourth round pick.  He will work well on special teams as his tackling as improved over time at Northwestern.  Projected in the 7th round, the Browns may have reached but obviously see potential in what some have called a "poor mans Landon Collins".

Vince Mayle, WR, Washington State
4th round, #123 overall
Mayle has only been a receiver for 2 years but had 2 games where he had 252 receiving yards last year.  While Combine 40 time wasn't impressive, he appears to have a surprisingly quick burst once he gets the ball.  He will come in projected as the fourth or fifth receiver option but should see work as a kick returner on special teams his first year.

Charles Gaines, CB, Louisville
6th round, #189 overall
For Mike Pettine, you can never have enough cornerbacks.  Which is why Gaines was chosen as the first of three 6th round picks for the Browns.  Gaines was a projected third round pick so the Browns got good value from him.  He could contribute to special teams as well as a possible nickelback if Justin Gilbert continues to struggle.

Malcolm Johnson, TE, Mississippi St.
6th round, #195 overall
Johnson will more than likely be used as an H back/fullback more than a true tight end.  Known for his good hands and a vocal leader with MSST, he has the potential to bring some blocking in to create holes for the running backs and another special team specialist.

Randall Telfer, TE, USC
6th round, #198 overall
Telfer only had 197 yards receiving but looks to be more of a blocking tight end.

Hayes Pullard, ILB, USC
7th round, 219 overall
Going back to USC, the Browns took Pullard to bring in as a backup ILB.  Had some success but doesn't appear to be anything more than special teams depth at this time.

Ifo Ekpre-Olomu, CB, Oregon
7th round, 241 overall
In what could be the steal of the draft, the Browns selected Ekpre-Olomu with their final selection.  If not for a severe knee injury he could have been a first round pick.  He is a tenacious player that could be a starter, possibly at safety, if he is able to come back from the knee injury.  Defintely a low risk/high reward pick for the Browns. 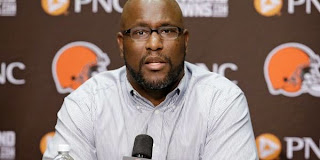 My take:  The Browns went out and drafted football players.  Nothing flashy, just guys who were solid in their college careers.  They may have drafted themselves at least 3-4 players that could be starters this year.  Obviously, the quarterback position wasn't addressed but it appears the Browns are all in with McCown and Manziel in 2015.  But they more than addressed their defensive efficiencies, strengthened their offensive line and grabbed a wide receiver.  The Browns had an excellent approach by drafting  immediate starters in the first 2 rounds as well as thinking of the future.