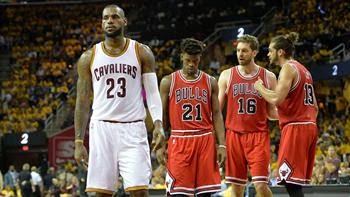 There's always next time, right? The first game of the Eastern Conference Semi-Finals didn't quite go how the Cleveland Cavaliers planned it. I'm pretty sure that even with the lost of Kevin Love and suspension of JR Smith, the Cavs did not see themselves trailing in this series. Especially so soon. 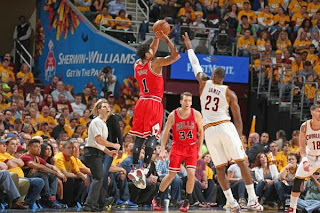 The Chicago Bulls opened up the 2nd round of this years playoffs the exact same way they ended the first, with a bang. Coming off of a 54-point Game 6 and series clinching annihilation of the Milwaukee Bucks, the Bulls continued to play almost unbelievably.

Our Midwest rivals began the by taking immediate advantage of mismatches created by the absence of two Cleveland starters. Mike Miller was placed in the starting lineup in hopes to keep the spacing of the Cavs offense and to replace the shooting threats that Love and Smith held. Coach Tib for the Bulls attacked Miller, who is not known for his defense, with versatile big man Pau Gasol. Gasol's high and offensive skill made Miller all but nonexistent on defense.

Chicago's advantage in the post opened up the floor for their perimeter players like the Red Sea. The Bulls made their first six attempts from the 3-point line in the FIRST QUARTER. Most noticeably was Mike Dunleavy who score 13 quick first quarter points. You know you're in for a long night when Dunleavy is having a night like that. 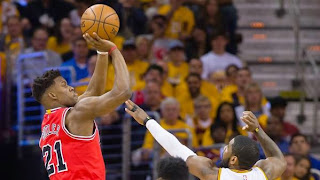 The Cavs seem to be in a daze during the entire first half. They could not get and stops or knock down shot in the first quarter. When they did it a few shots in the second quarter, they could hold the Bulls to keep things close. It was if they had been frozen over that week long break between series.

David Blatt quickly went to his bench and brought on Tristan Thompson. Thompson's energy and hustle seemed to help but it could not get the Cavs over the hump. It was as if the Bulls could do no wrong. Jimmy Butler was playing excellent defense and scoring well on offense. Derrick Rose also had the type of performance that we were use to seeing before all of the injuries. When you add all of those things up, it equaled a long night for Cleveland.

While the Bulls were playing barely less than perfect, the Cavs were struggling just to look like a playoff team. Kyrie Irving went 1-7 from the field with only 3 points in the first quarter. LeBron was the only one that seems to be able to gain any traction early. However, the Cavs were able to pick things up later in the half. 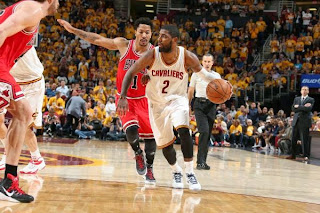 After a few minutes were gone in the second quarter, Kyrie went on a tear. The Bulls had just expanded the lead to 13 went Kyrie went off. Irving went full showcase, displaying his ridiculous handle, excellent shooting ability and unmatched talent at finishing at the rim, especially over the bigs. Going on a personal 10-0 run, Irving cut the Chicago lead to 39-33 and gave Cleveland some much needed momentum. Kyrie had 17 total points in the first half.

The extra mojo was not enjoyed by the Cavs for long. Chicago responded back with seven straight points and extending the lead back out to double digits. That was the theme for the majority of the game. The Cavs would close the lead but could not get over the hump. Then the Bulls would make a run and kill the momentum of Cleveland.

This was most evident coming out of halftime. Only being down five at the half, Cleveland was able to take their first lead early in the third quarter. But the lead only lasted two possessions. Chicago answer back with an immediate 15-0 run putting the Cavs back down by double digits.

The two teams just seemed to be complete opposites. The Cavs could not make a shot but the Bulls could not miss. The Bulls were getting to most of the loose balls and rebounds, besides James and Thompson, the Cavs got very few. Cleveland's offense looked broken and stagnant, Chicago's looked like as smooth, strong and power as a performance car engine.

In a situation where Cleveland was down one rebounder and scorer, no one stepped up to take his place. Mozgov spent most of the game on the bench because he was ineffective at both guarding the pick-and-roll and checking Gasol away from the rim. Coach Blatt went with a small lineup, which was actually more affective, but it was not enough to get the job done. The Wine and Gold were not able to sustain energy or efficiency long enough to get the upper hand and our one-on-one defense was something I hope to never see again, by ANYONE. 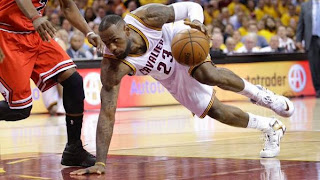 With that being stated here's what I think about game two. LeBron, though he was inefficient late, still had, what for others would be, a great game 19pts 15rebs 9asts. James said a number of times after the game that he needs to do more, do better, step up. If he can do more or better then Chicago needs to be afraid. The Cavs like they always do, will find their rhythm and bounce back but a game two win is critical until we can get Smith back from suspension. The Bulls may remain hot and play well but they will not be able to sustain the level of play they were at in game one.

I would put my money on the fact that Dunleavy will not be able to have that type if first quarter performance again. Just look at how little he did for the remaining three quarters of game one. Rose does not play nearly as well on short rest. So that will play a large part in what he will be able to do next game. Jimmy Butler will probably play well but the energy he will have to extend against LeBron and/or Kyrie may neutralize him. The Cavs will struggle with the big men of Chicago but that is something they will just have to battle against in game two. 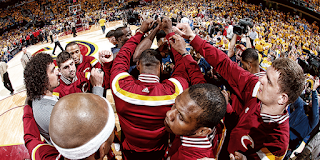 Once Blatt does some reshuffling and gets the new rotations together, things will fall into place for Cleveland. Smith coming back in game three will be another threat that Butler will not be able to guard. Guys are just going to have to man up and step up to fill in for Kevin Love. I still think the Cavs will win in six. They should be able to steal one in Chicago when Smith gets back. Mzgov will be much better and Blatt will reconfigure his scheme to matchup better. Look for LeBron's veteran leadership and play to take over. The key to winning this series you ask? Make Chicago play with and match up against us. Do not try to match up against what they are doing. Do not try to answer them. Cleveland has to make Chicago match up to Cavs basketball.