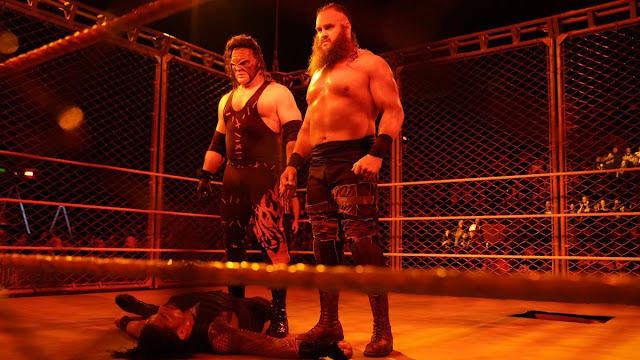 It's the beginning of the week and time to kick things off in wrestling with Monday Night RAW, live from Portland, Oregon. This week's RAW is the go home show to this Sunday night's WWE TLC pay per view. Expect more buildup to the event as The Shield officially reformed last week and will go to war with The Miz, Sheamus, Cesaro and Braun Strowman at the event.

- WWE Intercontinental Champion The Miz returned with another edition of Miz TV with Braun Strowman as his special guest. 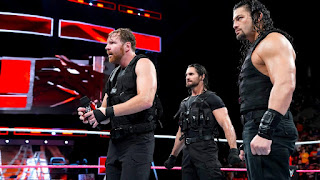 - Kurt Angle Promo: Angle hypes this Sunday's WWE TLC pay per view and immediately gets interrupted by The Shield, who arrive with their old entrance through the crowd and dressed in their old Shield battle gear. Reigns takes the microphone and says you have two choices when dealing with The Shield, either leave the ring or get your ass beat. Rollins talks about The Shield's history and it's great to be back. Ambrose takes the microphone, hypes their match on Sunday and calls out their four opponents to fight right now. The Miz, Sheamus, Cesaro and Braun Strowman hit the ring, but are cut off by Kurt Angle, who tells them that they're not fighting until Sunday. Angle hypes Reigns vs. Strowman in a Steel Cage and Ambrose and Rollins defending the tag team titles against Sheamus and Cesaro tonight to end the segment.

- Elias Samson, Luke Gallows and Karl Anderson are sitting in the ring. Gallows and Anderson warm up their voices before singing with Elias about Jason Jordan being a nerd. Jordan, Titus O'Neil and Apollo Crews interrupt and head to the ring for their match. 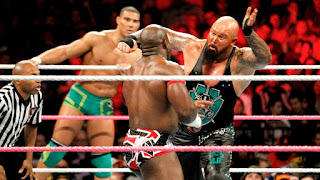 - Backstage, Emma is interviewed. Emma says she's sick of hearing about Asuka, the attention should be on her because she started the Women's Revolution. Alexa Bliss interrupts and agrees with Emma. Alexa then mocks Mickie James and announces Alexa/Emma vs. Mickie and a partner of her choice if she can find one. 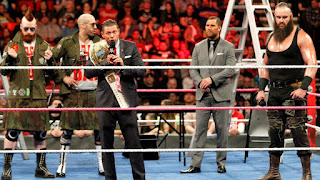 - Miz TV with The Miz: The Miz arrived with Sheamus, Cesaro and Curtis Axel. Miz hypes Sheamus and Cesaro winning back the tag team titles tonight. Sheamus and Cesaro promise to shatter The Shield tonight. Miz promises to expose The Shield as an over hyped nostalgia act on Sunday. Miz finally introduces Braun Strowman and out comes the monster. Strowman says he's going to tear The Shield apart for putting him through the announcers table last week. Strowman promises to start tonight by destroying Roman Reigns in their Steel Cage Match. Miz reminds everyone that The Shield said they'd take on as many people that stepped up to them, so Miz announces a fifth partner in the match. Kurt Angle interrupts and immediately shoots down that idea. Miz tries to change Angle's mind. Angle finally announces that if Strowman beats Reigns later then Miz can have a fifth partner, but if Strowman loses it'll go back to a three on three match. Angle then announces that everyone is banned from the ring during the tag team titles match and the Steel Cage Match. 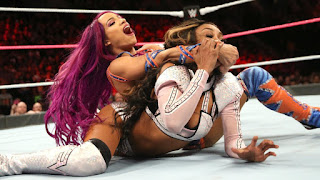 - Sasha Banks vs. Alicia Fox: The match closes out with Alicia unloading elbows on Sasha. Alicia with more offense on Sasha and then takes Sasha to the mat. Sasha makes the comeback and traps Alicia in the Banks Statement submission for the tap out win.
Winner: Sasha Banks, by submission.

- Backstage, before Sasha Banks can be interviewed, Alicia Fox attacks her from behind. Alicia tosses Sasha into production cases and tells Sasha that she will learn to respect her. 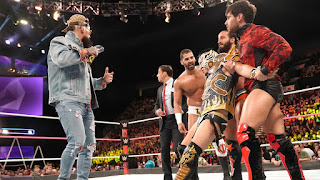 - Enzo Amore Promo: Enzo states that the way he lost the WWE Cruiserweight Championship was unfair, which brings out the champion Kalisto. Kalisto mocks Enzo for trying to place blame and how Enzo sleeps in knock off sheets at night. Enzo claims to not wear any knock off stuff and claims to be wearing $10,000 worth of ring gear right now. Noam Dar, Ariya Daivari, Tony Nese and Drew Gulak suddenly attack Kalisto from behind and beat him down, while Enzo trash talks Kalisto. Mustafa Ali hits the ring and takes everyone out, except for Enzo, who gets the upper hand. Ali and Kalisto get the five on two beat down as Enzo continues to talk trash both men. Enzo hits the JawdonZo on Kalisto and then asks Kalisto and Ali "How their doin'" as they're both laid out. 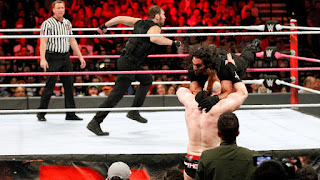 - "WWE RAW World Tag Team Championship Match": Dean Ambrose and Seth Rollins (c) vs. Sheamus and Cesaro: The match closes out with Cesaro catching a Rollins kick and then lands an uppercut. Sheamus and Cesaro double team Ambrose until Rollins makes the save. Rollins takes out Sheamus allowing Ambrose to hit Dirty Deeds on Cesaro to score the pinfall and retain their titles.
Winners: Dean Ambrose and Seth Rollins, by pinfall, to retain the WWE RAW World Tag Team Championship.

- Backstage, Curtis Axel is giving a pep talk to Sheamus, Cesaro and Braun Strowman. Axel says he needs Strowman to win because Axel is the fifth partner and he needs this match. Axel is pumped and wants Roman Reigns. Strowman tells him to go find Reigns than. Axel tries to back out, but Sheamus and Cesaro talk Axel into doing it, claiming their partner wouldn't be afraid of Reigns. 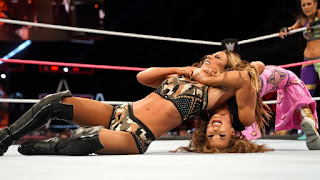 - Backstage, Curtis Axel finds The Shield and heads toward them.

- Backstage, The Miz hypes up Braun Strowman, Sheamus and Cesaro and then asks where Curtis Axel is. Braun says he sent him to attack Roman Reigns. Miz looks worried as he excuses himself to find Axel.

- Backstage, Mickie James is interviewed. Mickie says she's proud of her accomplishments and would love to win the WWE RAW Women's Championship and take it home to her 3 year old son.

- Backstage, The Miz finds Curtis Axel beaten up and hung upside down from a forklift. Axel is helped by WWE Officials. Miz is interviewed and reveals that Axel was never the fifth man that he's chosen if Braun Strowman wins tonight. 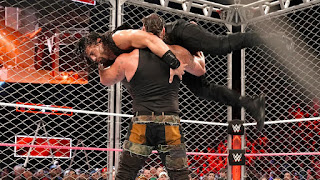 - "Steel Cage Match": Roman Reigns vs. Braun Strowman: The match closes out with Sheamus, Cesaro, Dean Ambrose and Seth Rollins arriving and brawling around ringside and to the backstage area. The Miz follows and locks all four men in a room to keep them away from ringside. Reigns starts climbing the cage, but Strowman stops him and lands a headbutt. Reigns kicks Strowman off the ropes, crotching him. Reigns hits two straight Superman Punches dropping Strowman to the mat. Strowman counters the spear, but eats another Superman Punch midair for a near fall. The lights suddenly turn all red in the arena and Kane bursts from under the ring mat as Reigns spears Strowman. Kane hits two choke slams on Reigns. Strowman hits the running power slam on Reigns. Kane lands the Tombstone on Reigns and then Strowman hits one more running power slam for the pinfall.
Winner: Braun Strowman, by pinfall. 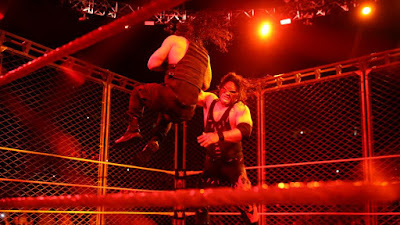 - After the match, The Miz gloats and announces that Kane will be his fifth partner at WWE TLC to end the show.