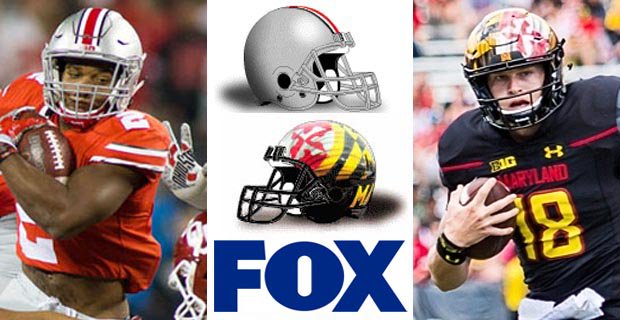 
The J.T. Barrett led Buckeyes put together their most complete game of the season as they pounded Rutgers 56-0. This was the second year in a row the Silver Bullets pitched a shutout against the Scarlet Knights who have lost the last two years to the Buckeyes by a total of 114-0. 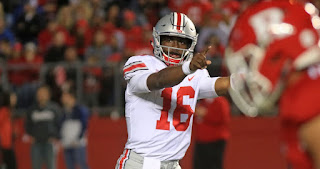 “I think it’s a tremendous honor,” Barrett said on his record. “I came to Ohio State, I always wanted to be a quarterback there, and win football games and be productive. This is a great honor and I’m just going to focus on winning football games.”

Northeast Ohio product Demario McCall led the Buckeyes in rushing, taking full advantage of his opportunity, with 103 yards and a touchdown on eleven carries. McCall also did some damage in the passing game with a 35 yard touchdown catch.

Mike Weber made the most of his carries piling up a career-highthree touchdowns while J.K. Dobbins only got six carries in a game that got out of hand quickly for Rutgers and allowed the Buckeyes to get others involved.

The Terrapins opened the 2017 campaign with a big upset on the road against #23 Texas and are coming off a 31-24 road win in their Big Ten opener against Minnesota.

Buckeyes coach Urban Meyer knows that this Terrapin team isn’t the same one the Buckeyes rolled over 62-3 last year.

“Playing a very good Maryland team that beat Texas,” Meyer said. “And came back with their third-string quarterback and really looked much improved against Minnesota. A very good team.”

That third-string quarterback is Max Bortenschlager, a sophomore who will now lead the Terrapins the rest of the year after season-ending knee injuries to Tyrrell Pigrome and KasimHill.

“I’m feeling good after the win, but that only lasts so long,” said Bortenschlager. “Just have to look forward to this week and just have to build off last week.” 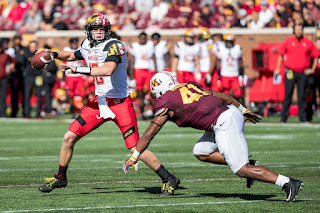 Inadvertently, Buckeye quarterback Dwayne Haskins played a big part of Bortenschlager getting to Maryland. When Haskins, who was a local kid originally committed to Maryland, flipped to Ohio State a scholarship opened up. Bortenschlager, who was committed to Buffalo at the time, was convinced by Maryland offensive coordinator Walt Bell to come to the Terrapins. While Bortenschlager isn’t as flashy and Pigrome and Hill, he’s steady, plays within himself, and knows what his coaches need from the quarterback position.

In Maryland's win against Minnesota Bortenschlager attempted just two throws of 20 yards or more and ended with only 154 yards passing. But he also threw two touchdowns and did not throw an interception.

“I think he was confident and comfortable with the game plan,” Maryland coach DJ Durkin said. “That’s Max. He’s the same guy. He’s got a quiet confidence about him, and he went out and played that way.”

Helping take the pressure off of Bortenschlager is running back Ty Johnson whose 34 yard touchdown run put the Terrapins ahead of Minnesota with a 1:10 left last week. Johnson, who leads Maryland in rushing with 411 yards on the year, totaled 130 against the Gophers to go along with what proved to be the game-winning touchdown.

The Buckeyes defense will also have to lock down the Terrapins leading receiver D.J. Moore.

Moore had a big game against Minnesota with eight catches for 90 yards and a touchdown. Moore has 30 receptions on the year to go along with 403 yards and five touchdowns.

Durkin, a former assistant coach for Urban Meyer, knows the task is tall for the Terrapins. Maryland will have to try and stop the No. 5 total yardage and 11th ranked scoring offense in the nation. Add to that the problem of trying to rack up points against the No. 16 scoring defense and it could prove to be a long day for the Terrapins. But Durkin knows that the bigger the challenge, the bigger the opportunity.

“It’s going to be an unbelievable opportunity this weekend,” Durkin said. “This is a great football team that we’re playing, and I mean that -- great.”