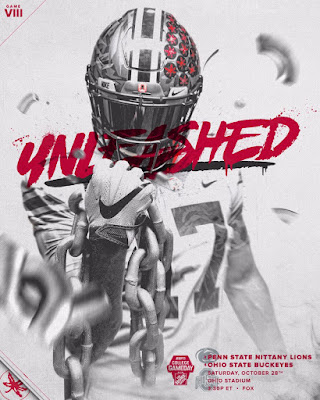 
The sixth-ranked Ohio State Buckeyes entered their off-week firing on all cylinders and playing some of their best and most complete football of the year. The 6-1 Buckeyes have gone unscathed in Big Ten play and find themselves staring down the barrel of the toughest part of their schedule. With three ranked Big Ten opponents looming over the next five games, including this weekends showdown against No.2 Penn State, we’ll see if the Buckeyes have truly progressed since their loss to Oklahoma and preview their biggest Big Ten battle. Here are some of the biggest questions going into the final stretch of the 2017 Buckeye season:


Has J.T. Barrett and the Buckeye offense actually gotten better?

The Buckeyes have averaged 57 points per contest over their last four games. In that span J.T. Barrett has thrown five touchdowns twice, ran for three, and has 19 total scores. He is completing 71% of his passes and has zero turnovers. Barrett has even played himself back into some Heisman talk with his recent play.

But to really answer the question we must look past the numbers.

One of the biggest criticisms earlier in the year of J.T. Barrett was he didn’t look like he progressed from last year. There was no growth.

The most obvious factor for J.T.’s early struggles was a new offensive coordinator bringing a new offense to the Buckeyes. Kevin Wilson’s offense is highlighted by two components that the Buckeye’s weren’t very good at last year; tempo and big plays. 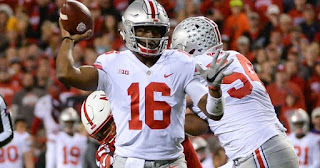 Last year Kevin Wilson’s Indiana offense threw 52 pass plays of 20 yards or more. The Buckeyes had only 33. The Buckeyes still aren’t hitting the long ball the way they want, but J.T. is getting better. Through seven games this year Barrett has completed nine passes of 20 yards or more for four touchdowns. The most encouraging part of those numbers is that four of the nine passes came last week against Nebraska.

Perhaps the most noticeable improvement in Barrett’s game is his confidence in himself, and his teammates.

One of my biggest criticisms of Barrett early in this year was his inability to give his guys a chance to make a play. Barrett looked like he was hesitant in his throws and reads. Only throwing to guys that were obviously wide-open and missing badly on throws to contested receivers.

Over the past couple games Barrett has taken advantage of the skill set and physicality of his wideouts. He is leading guys open, making crisp back shoulder throws, and tossing jump balls to his 6'4" playmaker Binjimen Victor. Fifteen different players have recorded a catch for the Buckeyes this season, nine of which have caught a touchdown.

“Right now, the offense as a whole is clicking the best it’s been in years. It’s clicking at the right moment.”

Much of Barrett’s improvement can’t be seen in the box score. He has put up big numbers ever since he was named the starter and own’s almost every relevant passing record at Ohio State. With his recent play he’s even started to sneak his name into Heisman consideration. This weekend will be his biggest test and will give Buckeye fans and the nation a good look at what type of J.T. Barrett we can expect going forward.


How much is the Buckeye secondary benefiting from weak passing attacks?

Losing three first-round defensive backs has proven to be a bigger hit than many Buckeye fans envisioned. There was no doubt to how great the Buckeye secondary was last year but replacing them with talents like Denzel Ward, Damon Arnette, and Kendall Sheffield gave many fans comfort as 2017 season approached.

Perhaps we expected too much too soon.

Since then the Buckeyes have allowed a quarterback to throw for over 100 yards just once and have two games with less than 20 passing yards allowed. But the competition also changed for Ohio State. 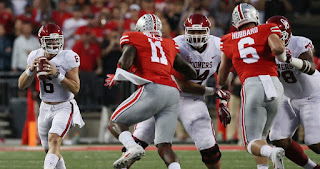 The very next game after Oklahoma threw for 386 yards against them the Buckeyes played an Army team that runs a triple option and only attempted eight passes going 2-8 for 19 yards. Add to that games against a passing attack led by a third-string quarterback for Maryland, a Rutgers quarterback with twice as many interceptions than touchdowns, and current interception leader in the Big Ten; Nebraska quarterback Tanner Lee, and you have a stretch of games that has allowed your secondary to gain some confidence and get comfortable with each other in the defensive backfield.

Bottom line is we just don’t know if the Buckeyes have improved or if the poor competition has inflated their recent numbers. But we’ll find out come Saturday when the Big Ten leader in passing yards, Trace McSorley, brings the No. 2 Penn State Nittany Lions to Columbus.

Penn State travel to Ohio State 6-0 including last week’s beatdown of No.19 Michigan, 42-13, where Heisman front-runner Saquon Barkley continued to display the all-around skill set that will make him one of the top picks in the NFL draft next year.

Statistically these teams are very similar. Ohio State and Penn State rank 1-2 in the Big Ten in scoring, total offense, and passing.

As mentioned McSorley is the Big Ten passing leader but J.T. Barrett is only 41 yards behind him. Although McSorley has the edge in passing yard Barrett has 7 more passing touchdowns, and has only thrown one interception this year compared to McSorley’s five. Barrett also is a more prolific runner although McSorley is a very capable runner and is coming off his most impressive rushing game of the year with 76 yards and three rushing touchdowns against Michigan. 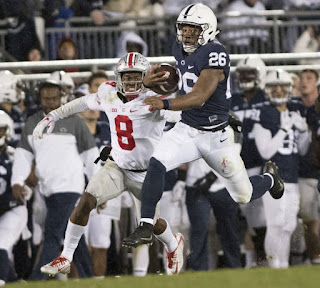 Despite some impressive quarterback play the heart and soul of the Penn State offense is Saquon Barkley. Barkley can do it all out of the backfield for the Nittany Lions amassing 757 yards and eight touchdowns on the ground and another 448 yards and three touchdowns receiving.

The Buckeye’s will undoubtedly see Barkley all over the field as Penn State can use their 230-pound bell-cow inside, off-tackle, or running wheel routes down the sideline. Ohio State head coach Urban Meyer is well-aware of the task of defending the nation’s leader in all-purpose yardage.

“No question, he’s the best all-purpose guy we’ve probably faced in probably, maybe my career,” Meyer said. “I’d be careful to say this, but he’s as good an all-purpose running back we’ve seen. And that’s 30 years.”

The Buckeye defense is also well-aware of how great Barkley is and the task they have in trying to contain him.

When asked about Barkley, Ohio State linebacker put it about as well as you can saying, “The dudes a monster. I’m very excited to go against him because he can do it all. Pass block, run routes, run the ball, jump over you, run through you.”

The Buckeyes got an extra week of preparation for Barkley as they are coming off a bye-week. Meyer is 20-1 coming out of a bye-week, his only loss happened in his first-year coaching, 2001, at Bowling Green State. He is 5-0 against Top 25 opponents.

Last year Penn State stunned the No.2 Buckeyes in overtime 13-6. That loss kept the Buckeyes out of the Big Ten championship game but didn’t derail their trip to the College Football Playoff. Revenge is definitely a motivator and when coach Meyer was asked about he didn’t shy away, "

They Buckeyes know the magnitude of this game. The Big Ten and National Championship implications. Someone will be on the path to the College Football Playoff after this game while the other will be praying for teams to fall for a chance to somehow find a way back in. With an early loss to Oklahoma the margin of error is much less for the Buckeyes.

“We still have that feeling in our gut of losing,” Billy Price said. “Since week two, we’ve been trying to get better defensively, offensively and on special teams. We’ve just been building it up every week, so when we go out there Saturday we’ll be ready to play.”