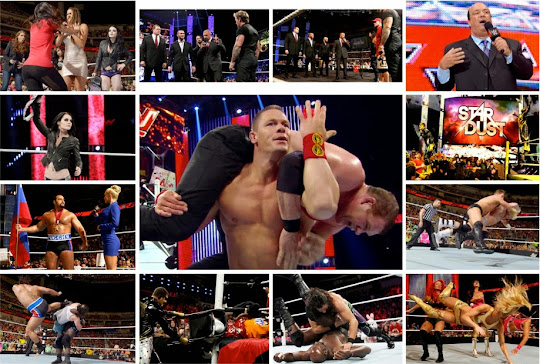 - Highlight Reel with Chris Jericho: Jericho kicks off RAW with the Highlight Reel. Jericho wishes everyone a happy Labor Day and announces his guest tonight, Randy Orton. Triple H, Corporate Kane, Seth Rollins and Randy Orton come out together. Triple H and Jericho trade verbal shots at each other. Triple H says he may be rethinking John Cena getting a rematch with Brock Lesnar at Night of Champions and possibly give it to someone else. Orton, Kane, Rollins and Jericho feel that they should be given a shot at Lesnar. John Cena arrives and enters the ring. Cena asks Triple H what the hell he's doing, says if he doesn't get his rematch that he's contracted to he'll take the WWE to court and take Triple H's job. Triple H can't believe Cena would do something that low. Rollins and Orton talk Triple H into letting Cena have his rematch cause there is "Plan B". Jericho mentions Orton getting beat down by Roman Reigns. Orton says he'll drop Reigns if he was in the ring right now. Roman Reigns arrives and enters the ring. Reigns dares Orton to drop him then throws his name in for a shot at Lesnar too. Triple H makes a six man main event with Cena/Reigns/Jericho vs Orton/Kane/Rollins and Triple H will see who can prove themselves. Rollins tries to hit Reigns with his briefcase but gets dropped by Reigns.

- Sheamus and Dolph Ziggler vs Cesaro and The Miz (w/Damien Sandow): Sandow interferes to take The Miz's spot in the match. Ziggler hits "Zig Zag" on Sandow. Miz capitalizes on the distraction and hits the "Skull Crushing Finale" on Ziggler for the pinfall.

- Big Show and Mark Henry vs Harper and Rowan: Rusev and Lana come out to watch the match. Henry goes for the "World's Strongest Slam" on Harper. Rusev enters the ring and super kicks Henry for the DQ.

- Video Segment with Nikki Bella: Supposedly when they were 16, Brie Bella stole Nikki's drivers license, wrecked Nikki's car and told the police she was Nikki.

- In Ring Segment: Paul Heyman arrives and talks about John Cena being destroyed again by Brock Lesnar at Night of Champions.

- Jack Swagger (w/Zeb Colter) vs Curtis Axel: Zeb Colter makes his return since being taken out by Rusev at SummerSlam. Bo Dallas comes out with three fans and watches from the stage. Swagger makes Axel tap out to the "Patriot Lock". Dallas congratulates Swagger then introduces Swagger to the three fans. All three fans were affected somehow by Swagger losing to Rusev.

- Adam Rose (w/Exotic Express) vs Titus O'Neil (w/Heath Slater): The bunny in Rose's posse beats up Slater after getting pushed down. O'Neil gets rolled up by Rose for the pinfall on the distraction.

- Rusev (w/Lana) vs Zack Ryder: Lana rips on the fans for celebrating Labor Day as another day to not work. Rusev makes quick work of Long Island Iced Z making him tap to "The Accolade". Mark Henry hits the ring and Rusev and Lana retreat. Henry says Rusev is scared, Henry says he is scared too....scared of what he'll do to Rusev. Henry says Rusev will be the first international inductee into the hall of pain.

- Backstage Segment: Triple H and Stephanie McMahon are backstage talking about the Nikki and Brie feud. Stephanie says she has an announcement for Nikki.

- In Ring Segment: Stephanie McMahon and Nikki Bella are in the ring. Stephanie tells Nikki she's proud of her and is the face of the Divas Division. Stephanie gives Nikki a shot at the WWE Divas Championship. Brie Bella comes out and asks her if this is what all this was about, being champion. Nikki begins to belittle Brie when A.J. Lee comes out. A.J. says she is the number one contender cause she never got her rematch. Divas Champion, Paige, is out next. Nikki tells Brie to quit for her like she did for Daniel Bryan, Brie refuses. Nikki tells Brie to walk away and leave her alone. Brie shoves Nikki to the mat and takes out Paige in the process. A.J. skips around with Paige's title and is ordered to give it back by Stephanie.  A.J. does and skips away.

- Video Segment: Bray Wyatt comments on his "Steel Cage Match" against Chris Jericho next week. Says its time for Jericho to pay for his sins.

- Goldust (w/Stardust) vs Jimmy Uso (w/Jey Uso): The Rhodes Brothers try to apologize again for their actions on RAW and Smackdown last week but get attacked by The Usos before the match. Goldust hits the "Final Cut" on Jimmy for the pinfall. The Rhodes Brothers attack Jey after the match and slam a chair on his leg.

- Backstage Segment: Mark Henry tells Big Show to sit out when he gets his match against Rusev cause he wants to do it alone.

- "Six Man Tag Match": John Cena, Roman Reigns and Chris Jericho vs Randy Orton, Corporate Kane and Seth Rollins: Triple H and Stephanie McMahon are seated at ringside to watch this match. Cena hits "AA" on Kane and Reigns spears Kane for the pinfall. Cena hits an "AA" on Rollins on the announces table after the match, celebrates and says he's ready for Brock Lesnar at Night of Champions.