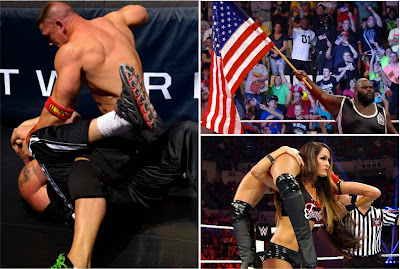 Wrestling Lockup with Brandon, brought to you by Triple Threat CLE, comes to you with this week's Monday Night RAW recap for the week. This weeks RAW is the go home show to this Sunday's Night of Champions. This weeks RAW takes place in the Cajundome in Louisiana.

- In Ring Promo with John Cena and Paul Heyman: Heyman gets interrupted by John Cena, as Heyman shows a preview of what will happen at Night of Champions to Cena. Cena asks where Brock Lesnar is cause if Lesnar doesn't show then he's fighting Heyman. Heyman intros Lesnar but Lesnar is nowhere to be found. Heyman says Lesnar's private plane is delayed but he'll be here later. Heyman tries to leave but Cena grabs Heyman in a headlock and takes him hostage. Cena drags Heyman backstage and says Lesnar has 80 minutes to get there or he's kicking Heyman's ass. Cena throws Heyman in his locker room and tells The Great Khali to stand guard and make sure Heyman doesn't escape.

- Backstage Segment with Paul Heyman: Heyman gets a hold of Lesnar on his cell phone but Lesnar has a bad reception and can hardly hear Heyman.

- Backstage Promo with Roman Reigns: Reigns talks about Seth Rollins always having a plan. Says everyone has a plan until they get hit in the mouth which is what he'll do to Rollins tonight, over and over.

- Paige and Nikki Bella vs A.J. Lee and Brie Bella: Brie gets beaten down the whole match and loses by pinfall after the "Ram-Paige". Nikki lays Brie out with her finisher after the match. Paige and A.J. have a skip off and stop and stare at each other.

- Backstage Promo with Bray Wyatt: Bray with his usual creepy promo, talks about his upcoming match with Big Show next and tells us to follow the buzzards.

- "Six Man Tag Match": The Usos and Sheamus vs Goldust, Stardust and Cesaro: Sheamus flies through the air and takes out the trio of heels on the floor. A six man brawl breaks out with everyone hitting their finishers. An Uso with the "Superfly Splash" off the top rope on Cesaro for the pinfall.

- In Ring Segment with John Cena and Paul Heyman: Cena grabs Heyman out of his locker room and drags him to the ring. Heyman tells Cena to hit him and be a bully because it'll take a bully to beat Brock Lesnar. Cena refuses and actually lets Heyman go. Heyman makes a joke about Cena's parents. Cena grabs Heyman and throws him out of the ring. Lesnar's music hits and here comes the pain. Lesnar makes his way to the ring and meets up with Heyman on the floor. Cena dares Lesnar to come get some but Lesnar and Heyman turn tail and leave. Lesnar changes his mind, heads to the ring and jumps onto the apron. Cena attacks Lesnar and we've got a brawl. Lesnar hits a german suplex but Cena comes back for more as they both spill to the floor. Cena tosses Lesnar into the barricade and mounts Lesnar with punches. WWE security rush the ring and pull both men apart. Security hold Cena down as Lesnar and Heyman walk up the ramp. Cena yells "See you Sunday, Brock" as Lesnar and Heyman make a break for the exit. Lesnar appeared to be holding his nose as they left.

- Naomi vs. Cameron: Naomi locks in her submission finisher on Cameron and makes her tap out for the victory.

- The Miz and Damien Sandow vs Dolph Ziggler and R-Truth: R-Truth is dressed like Ziggler again tonight. Ziggler hits the "Zig Zag" for the pinfall for his team.
- Backstage Promo with Seth Rollins: Says Roman Reigns is gifted but not as gifted as Rollins. Compares Reigns to a gorilla. Rollins claims to be the future of the company and the next WWE World Heavyweight Champion.

- Roman Reigns vs. Seth Rollins: Rollins sets Reigns up for the "Curb Stomp". As Rollins charges Reigns folds Rollins in half with a spear. Reigns covers and scores the pinfall.

- In Ring Promo with Mark Henry, Rusev and Lana: Henry says at Night of Champions he's going to shut Rusev and Lana up. Rusev and Lana cut Henry off as they appear and head to the ring. Lana mentions that it was a Russian that beat Henry out for his spot in the Olympics. Lana attempts to make a pledge on who's winning Sunday. Henry makes his own pledge by doing the Pledge of Allegiance. Rusev attacks Henry and beats Henry down. Rusev locks in "The Accolade" on Henry but Henry begins powering out to the chants of "U.S.A.". Henry powers out and drops Rusev with a sit down spine buster slam. Rusev and Lana flee as Henry waves the American Flag as RAW comes to a close.

And that finishes up this week's RAW recap, I'll be here all this week with the following recaps.