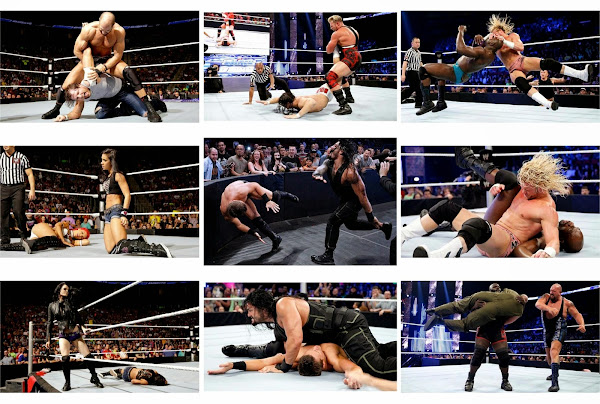 Welcome back to another edition of Wrestling Lockup with Brandon, brought to you by Triple Threat Podcast. Last night's Smackdown in Seattle, Washington, served as the last show before SummerSlam this Sunday. Let's get the recap started.

- Smackdown kicked off with "Mr. Hollywood" himself, The Miz, in the ring for MizTV. Miz says he'll retain the I-C Title at SummerSlam when he defeats Dolph Ziggler and says he wants to be a mentor to the younger talent. Miz calls down his guest, Roman Reigns. Miz makes jokes about Reigns and jokes about his match with Randy Orton at SummerSlam. Reigns finally heard enough and hits Miz, sending him rolling out of the ring and up the ramp. Reigns says he respects Orton but he will defeat "The Viper" at SummerSlam.

- Dean Ambrose vs Cesaro: Ambrose catches Cesaro off guard with "Dirty Deeds" and scores the pinfall. After the match "Mr. Money In The Bank" Seth Rollins arrives. Rollins says that he will defeat Ambrose at SummerSlam in their Lumberjack Match and show everyone that he is the future of the WWE.

- Backstage Corporate Kane breaks the news to The Miz that tonight it'll be Miz vs Roman Reigns in the main event because that's what is best for business.

- Titus O'Neil vs. Dolph Ziggler: Ziggler lands a "Zig Zag" on Titus to score the pinfall.

- Mark Henry (w/Big Show) vs. Luke Harper (w/Erick Rowan): "The World's Strongest Man" Mark Henry picks up the win by DQ as Rowan interferes. Big Show and Henry chase The Wyatts from the ring after the match.

- A.J. Lee vs Eva Marie: A.J. gets a rematch from RAW against Eva. Paige appears, skipping out to the ring. A.J. dives at Paige and attacks her on the floor. A.J. ends up getting counted out. After the match, Paige gets revenge and attacks A.J. and leaves her laid out with the "Paige Turner". Paige mocks A.J. again by skipping around.

- Jack Swagger (w/Zeb Colter) vs. Bo Dallas: Swagger applies the "Patriot Lock" and the match is over as Dallas taps out. Rusev and Lana arrive after the match. Lana says Rusev's victory over Swagger at SummerSlam will be dedicated to Russian President Vladimir Putin.

- During the break on the WWE app. Bo Dallas cut a promo and said the referee got confused and thought that Dallas reaching for the ropes and missing was a tap out.

- Roman Reigns vs The Miz: Miz locks in the figure four but Reigns is able to escape. Miz takes a beating in this match to the point where he decides to leave. Dolph Ziggler comes out and blocks Miz's escape. Reigns gets Miz back in the ring and folds him in half with a spear for the pinfall. Reigns celebrates in the ring as Smackdown closes out.

And that is a wrap on the recap. I will return Monday afternoon for the SummerSlam recap for this Sunday's special event live on the WWE Network for only $9.99. Till then, tap or snap!
Posted by nevaRWilliams at 1:00:00 PM