The Truth About The 0-16 Browns "Parade"


The problem is they don’t.
Who is they?
Everyone participating and supporting in the 0-16 parade.
If you want to go and have a good time, knock yourself out.  Sing, dance, make balloon animals.  Do whatever the hell it is you guys have planned.  Whoop it up like you never have before.  But if you do go to the parade there are a couple things that have to be made crystal clear.
You, nor your leader Chris McNeil, are doing yeoman’s work. 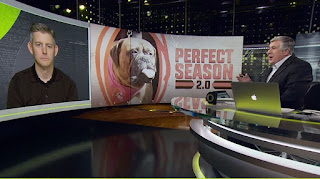 This event has been called a parade since it became a thing last year when the Browns were approaching the “perfect” winless season.  But as the chances of this parade have gone from doubtful to almost certain, I’ve noticed a change in tone regarding how they want it to be seen.  McNeil and his supporters want it to be seen as a protest.  They have said that it is a message being sent, “a shot across the bow” to Jimmy Haslam and the front office of the Cleveland Browns.
Stop it.  You sound ridiculous.
There are a couple reasons I doubt his sincerity in the “protest” message.
If this parade is honestly meant to send a message to Jimmy Haslam they would be having it regardless of if they win this Sunday.  Let’s be honest.  There’s no difference between 1-15 and 0-16.  If you believe the organization is inept today, a win in the last game of the season doesn’t change that.  Beating the Steelers doesn’t suddenly make them smarter.
Secondly, the idea that this parade is going to send a message to Jimmy Haslam is ridiculous.  At the end of this season they will be 1-31 over the last two years…  1-31…
If the worst two-year stretch of football in the history of the world doesn’t send a message, if declining attendance and an empty stadium doesn’t send a message, what-in-the-hell makes you think your parade is going to send a message? 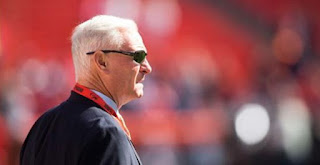 I’ve seen tweets of people saying, “when the Browns are good in a couple years you can thank this parade for putting pressure on them.”  And “all these idiots attacking [McNeil] for the parade is EXACTLY why Haslam doesn’t give a shit if the team sucks.  You idiots keep spending money on the worst team in sports history.  Why would he care to fix it if it’s still profitable?”
What the hell is wrong with you people?  (The funny thing about the second tweet, is one of those “idiots” he’s talking about is McNeil, as he is a season ticket holder)
The man is a billionaire.  You think YOU can shame him?
Another one of my problems with the parade is the effect it will have on the city.  A city that McNeil isn’t even from or currently reside in.
The day after the Houston Astros won their first World Series Championship I drove to work and had to hear national moron Boomer Esiason use his CBS sports minute not to talk about the historical year the Astros had or what it meant to the city of Houston.
Nope.
Instead he used it to tear apart Cleveland as a bunch of losers.
Now what Boomer Esiason has to say doesn’t mean much and only solidifies him as a jack-ass.  But as a Clevelander you get tired of hearing it.
And that’s my final point.
If you’re supporting this parade, then you can no longer mention your heart ache or frustration with the many egregious events of Cleveland sports history.
The Shot.  The Drive.  The Fumble.  Red-right 88.  The Decision.  Jose Mesa.  Tony Fernandez.
And now…  The Parade.
Because I guarantee when the historic blunder that is this season is written in the annals of history it will be known as “The Parade.”
And you will have been a part of it.

I don’t know McNeil personally and in no way am I questioning his fandom and commitment to Cleveland sports teams (or anyone else for that matter).  I follow him on Twitter and he’s a good follow and pretty funny most of the time.  Hell, I tip my hat to him for convincing thousands of people they’re making some kind of change and holding Haslam’s feet to the fire.  We both know that’s not true.  And if the Browns somehow win this weekend all the money collected for the parade will be donated to the Cleveland Food Bank, which is a great cause and should be applauded.
So, with that being said, go to the parade.  Have fun.  Drink, eat, and be merry.  But if you do go don’t for one second think you are doing anything other than having a good time.  You’re not sending a message to the front office.  Nothing will change because you took a lap around the stadium.  The nation isn’t laughing with you.  They’re laughing at you.  The only ones being embarrassed by this parade is yourselves and this city.  You are solidifying your spot in Cleveland sports history.  And not in the good way.