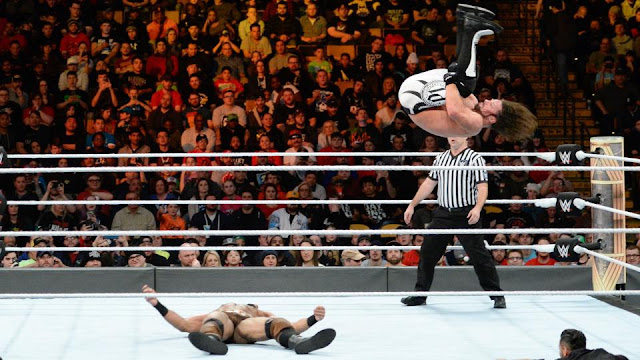 What's up wrestling fans, Triple Threat CLE is back with your WWE Clash of Champions pay per view recap from Sunday night. WWE Clash of Champions was live at the TD Garden in Boston, Massachusetts and was also shown on the WWE Network. All four titles were on the line at the event as was Kevin Owens and Sami Zayn's jobs. Who walked out of the event the winners and losers? Read on and check out the recap! 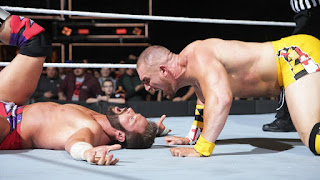 - Mojo Rawley vs. Zack Ryder: The first match of the night kicked off on the PreShow. Zack Ryder looked to get revenge on Mojo Rawley, after Mojo turned on Ryder a few weeks back. The match closes out with Mojo in control of Ryder as Ryder tries to make a comeback, but gets shut down. Ryder finally beats down Mojo in the corner and hits two straight Broski Boots for a near fall on Mojo. Mojo drills Ryder with a running punch, knocking out Ryder for the pinfall. After the match, Mojo talks trash to Ryder while he's down and out. 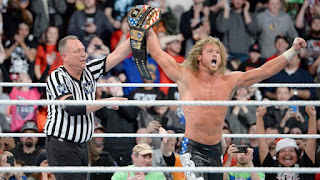 - "WWE United States Championship, Triple Threat Match": Baron Corbin (c) vs. Dolph Ziggler vs. Bobby Roode: The first match of the pay per view saw Baron Corbin defending his WWE United States Championship in a Triple Threat Match. The match closes out with Roode tossing Corbin outside and blocking a Ziggler super kick. Roode hits the Glorious DDT on Ziggler and goes for the cover. Corbin runs back into the ring, but Roode sees him and sends Corbin back outside. Corbin pulls Roode outside and hits a choke slam/back breaker combo. Corbin tosses Roode back into the ring and then hits End of Days. Ziggler comes out of nowhere and hits the Zig Zag on Corbin to score the pinfall and win the title. 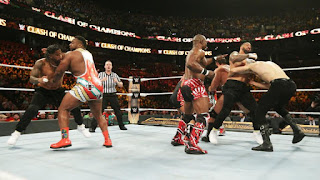 - "WWE Smackdown Live World Tag Team Championship, Fatal Four Way Match": The Usos (c) vs. The New Day vs. Shelton Benjamin and Chad Gable vs. Rusev and Aiden English: The second match of the night saw The Usos defending their tag team titles in a Fatal Four Way Match. The match closes out with Rusev nailing the Machka Kick on Big E, stomping on Big E's back and then locking in The Accolade submission. Big E powers out, but Rusev repositions himself, reapplies The Accolade and looks to be choking Big E out. Gable hits the ring, breaks the submission and german suplexes Rusev. English hits the ring, misses a charge on Gable and gets a german suplex. Gable and Big E slug it out until Gable goes behind Big E and hits another german suplex. Jimmy hits the ring, charges, misses and Gable with a near fall rollup. Jey hits the ring and takes off Gable's head with an Uso Kick. Uso Splash off the top rope and The Usos score the pinfall and retain their titles. 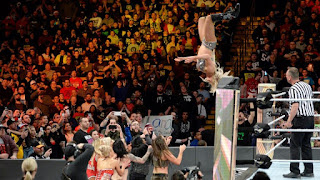 - "WWE Smackdown Live Women's Championship, LumberJill Match": Charlotte (c) vs. Nattie Neidhart: The third match of the night saw Charlotte defend her title in a LumberJill Match, with the entire Smackdown Live women's division surrounding the ring. The match closes out with all the women brawling at ringside and Naomi hitting a suicide dive. Ruby Riot distracts Charlotte and Tamina kicks Charlotte in the head. Nattie locks Charlotte in the Sharpshooter submission. Charlotte reaches for the ropes and finally grabs them as The Riot Squad yelled at Charlotte to tap out. Charlotte again gets pulled outside and attacked by the heels of the women's division. The faces run around and help Charlotte, starting another big brawl. Charlotte gets tossed into the ring as Carmella follows with her Money In The Bank briefcase. Before Carmella can cash in she gets beat down by The Riot Squad. Charlotte hits the moonsault off the top rope taking everyone out outside. Back in the ring, Nattie goes for The Sharpshooter, but Charlotte counters and makes Nattie tap out to the Figure Eight submission to retain the title. After the match, Nattie has a mental breakdown, accuses Charlotte of getting ahead because of the Flair name and says she's turning her back on the fans since we've all turned our backs on her. 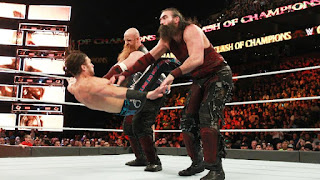 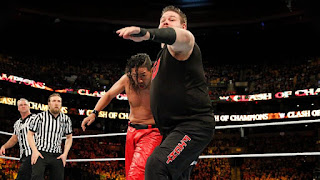 - Randy Orton and Shinsuke Nakamura vs. Kevin Owens and Sami Zayn, with Shane McMahon and Daniel Bryan as Special Guest Referees: The fifth match of the night saw Orton and Nakamura battle Owens and Zayn, with Shane McMahon and Daniel Bryan as referees. This match also had Owens and Zayn's jobs at stake. If Owens and Zayn lost then they would be fired from the WWE. The match closes out with Owens frog splashing Nakamura through the announcers table. Orton hits a power slam on Zayn and then the draping DDT. Orton hits the RKO on Zayn and covers. Before Shane can count the three, Owens shoves Bryan into Shane, stopping the count. Bryan and Shane argue as Orton hits the RKO on Owens. Zayn rolls up Orton and then he and Orton trade rollups back and forth as Shane and Bryan take turns making the count. Zayn rolls up Orton again and Shane counts to two and stops before a legit three, screwing over Zayn. Shane and Bryan start arguing again about what Shane just did. Orton goes for an RKO on Zayn, but Zayn counters and rolls up Orton. Bryan makes a fast three count and awards the match to Owens and Zayn before Shane can stop him. 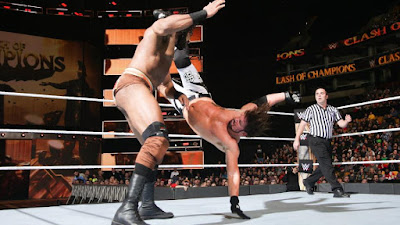 - "WWE World Heavyweight Championship Match": AJ Styles (c) vs. Jinder Mahal: The main event of the show saw Styles defending his WWE World Heavyweight Championship against Jinder Mahal. The match closes out with Mahal attempting a Super Cobra Clutch Slam, but Styles counters and hits a Pele Kick. Styles hits a springboard 450 Splash and The Singh Brothers try to pull Mahal to safety. Styles suicide dives onto The Singh Brothers and hits a Styles Clash on one, laying out both brothers. Mahal ducks the Phenomenal Forearm and nails Styles in the back of the head with a knee. Mahal hits the Cobra Clutch Slam, but Styles kicks out at two and a half. Mahal mocks Styles and sets him up for his own Styles Clash finisher. Styles counters out and traps Mahal in the Calf Crusher submission. Mahal reaches for the ropes, but Styles flips Mahal over back into the middle of the ring and reapplies the Calf Crusher submission. Mahal fights for a second and then finally taps out, giving Styles the victory to retain the title.
Posted by WrestlingFan78 at 12:00:00 PM