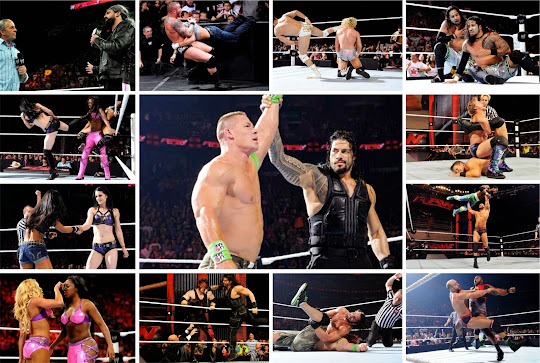 Welcome back to Wrestling Lockup with Brandon, brought to you by Triple Threat Podcast. It's time for this week's RAW recap, as we move closer to WWE Battleground.

- RAW kicked off live from the city that brought you the "Montreal Screwjob" in 1997, Montreal, Quebec, Canada, with Roman Reigns cutting a promo. Reigns talks about WWE Battleground and being added to the Fatal 4 Way as being a way for The Authority to help Randy Orton win the title by putting pressure on John Cena. Reigns guarantees a World Title win as Kane interrupts. Reigns and Kane begin brawling inside and outside of the ring, after Reigns calls Kane "The Authority's bitch". WWE officials hit the ring. Reigns spears an official during the chaos then "Superman Punches" Kane off the apron.

- We find out during the opening segment that Triple H and Stephanie are not here tonight.

- The Usos vs The Wyatt Family. The Usos go for a double dive on The Wyatt's however one of The Usos get pulled to the floor by Rowan. Harper hits the clothesline on the other Uso for the pinfall.

- "One Hand Tied Behind The Back Match": Alicia Fox vs Nikki Bella. The referee ties Nikki's arm behind her back however Alicia avoids the referee and ends up attacking and stomping Nikki, not letting up. The match is thrown out.

- Rob Van Dam vs Rusev. RVD goes for "Rolling Thunder" but misses. Rusev hits his super kick then locks RVD in "The Accolade". RVD tries to fight it but taps out.

- Randy Orton vs Dean Ambrose. Ambrose almost scores the pinfall after reversing Orton's draped-DDT. Orton ends up hitting an "RKO" for the pinfall.

- Alberto Del Rio vs Dolph Ziggler. Fandango, who has an issue with Ziggler now, is doing commentary.
Del Rio scores the pinfall on Ziggler, after Fandango distracted Ziggler by dancing. Del Rio earned a United States Championship Match against Sheamus. Fandango danced on the announcers table more after Ziggler lost.

- WWE Hall of Famer, Bret Hart, returns to the city that he was screwed in back in 1997. Bret thanks the fans and says if he could still wrestle he'd do it right here in Montreal. Damien Sandow interrupts Bret dressed like Bret Hart. Sandow imitated Bret and called Shawn Michaels his idol. Bret finally heard enough as he sends Sandow flying out of the ring with a punch.

- Chris Jericho vs The Miz. Miz is stomping away on Jericho when out of nowhere, Jericho grabs Miz. Jericho flips Miz on his back and locks in the "Walls of Jericho". Miz eventually taps out. After the match the lights go out and when they come to, Bray Wyatt is sitting in his rocking chair on the ramp. Bray mocks Jericho and says he is still waiting for Jericho to "save" him. Jericho tells Bray to shut the hell up and action speaks louder then words and he's going to prove it. Jericho heads up the ramp to meet Bray. The lights go out again and when they come to again, Rowan and Harper are standing beside Bray. Jericho thinks twice about attacking in a 3 on 1 and backs off.

- Funkadactyls vs. Paige & AJ Lee. Cameron tags into the match and gets hit by Paige with the "Paige Turner" for the pinfall. After the match, we have a CAAATTTFFIIGGHHTTT!!!! as ECW announcer Joey Styles would say. Cameron and Naomi pull hair and fight until Cameron finally walks off.

- Cesaro vs Kofi Kingston. Kofi again for the second week in a row scores a roll up pinfall on Cesaro. After the match Cesaro attacks Kofi. Big E hits the ring and makes the save, chasing off Cesaro.

- El Torito vs. Bo Dallas. Obvious squash match as Dallas picks up the pinfall with the "Bo-Dog" and stays undefeated. Don't Stop Bo-Leiving!!!!

- John Cena vs. Seth Rollins. The match ends as Kane heads to the ring. Randy Orton appears out of no where and attacks Cena from behind as he's watching Kane. Kane and Orton beat down Cena until Roman Reigns hits the ring. Reigns "Superman Punches" Kane and Orton but then gets hit with the MITB briefcase by Rollins. Rollins hits Cena with the briefcase and is ready to cash in his contract. Before we have a legit match, Dean Ambrose hits the ring and attacks Rollins. Ambrose and Rollins brawl to the back. Cena hits an "AA" on Orton and Reigns spears Kane. RAW ends with Cena and Reigns raising each others hands.

And that wraps up this week's RAW recap. Thanks for reading, please like us on Facebook and follow us on Twitter. We are Triple Threat Podcast. Till next time, tap or snap.
Posted by nevaRWilliams at 1:00:00 PM