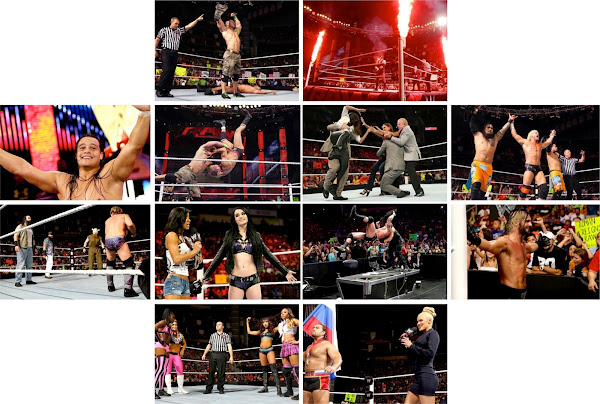 I'm back with another Wrestling Lockup with Brandon, brought to you by Triple Threat Podcast. Today's edition is the RAW recap from last night's show. Last week, "Plan C" went into play as Triple H accepted Paul Heyman's offer of his client, Brock Lesnar, facing John Cena at SummerSlam for the WWE World Heavyweight Championship. Stephanie McMahon, was escorted out of the building in handcuffs, after slapping Brie Bella who was in attendance as a fan. Cesaro approached Triple H and asked to be in The Authority. Xavier Woods, Big E and Kofi Kingston looked to have created an Alliance together. And Bray Wyatt continues to stalk "The Ayatollah of Rockin' Rollah" Chris Jericho.

- RAW took place this week live in Houston, Texas. RAW kicked off with the WWE World Heavyweight Champion, John Cena, cutting a promo. Cena talks about "Plan C", Brock Lesnar, being chosen as his next opponent, admits to probably getting a beating at SummerSlam but claims that he'll beat Lesnar just like he did two years ago. Paul Heyman arrives on stage with mic in hand. Heyman talks about Lesnar taking Cena's title, Cena about to become a victim, brags about Undertaker being MIA since Lesnar took him out and states that Cena will be beaten, victimized and conquered at SummerSlam. Cena rebuttals with how hard he works for the company, his passion, he has heart and guarantees leaving SummerSlam with the title. Cesaro arrives on the stage with mic in hand. Cesaro tells Cena that he's a walking muscled up billboard that can't wrestle, which gets a chant started from the crowd. Cesaro challenges Cena and we have an impromptu match kicking off RAW.

- John Cena vs Cesaro: Cena and Cesaro connect with boots to each other's faces. Cesaro climbs the ropes but Cena is there and delivers an "AA" off the top rope on Cesaro for the pinfall.

- Backstage Stephanie McMahon is embarrassed that she was arrested last week. Randy Orton is upset that he was taken out of his title match with Cena. Triple H tells Orton he has to take care of Roman Reigns before getting another shot at the title but not tonight cause it's Reigns vs Kane. Orton has a problem with Kane and Triple H now.

- Paige is in the ring cutting a promo. Paige promises she'll never act the way she did last week when she attacked A.J. Lee ever again. A.J. enters the ring to "CM Punk" chants. A.J. says she knows how Paige feels to lose her title, doesn't play little girl games and will tell someone to their face if she has a problem. Paige insults A.J. by calling her "crazy" and "mental". This sparks A.J. as she tackles Paige and we have a catfight! Paige escapes as A.J. dares her to get back in the ring.

- Triple H and Stephanie McMahon head to the ring to cut a promo. The fans chant "jailbird" at the misses. Triple H is angry that the fans laughed that Steph was arrested last week, will never forgive the fans for that and says how humiliated Steph is when she was just defending herself against Brie Bella. Brie Bella who was invited to RAW by Stephanie is called out to talk this out. Chris Jericho arrives on the stage with mic in hand and says he feels bad at what happened so he sings "Bad Boys", the theme from COPS, with the fans. Jericho rips on Stephanie some more then demands Bray Wyatt tonight. Triple H says Jericho will have to wait till SummerSlam for Wyatt cause he has Seth Rollins tonight. Rollins comes from behind and hits Jericho in the back with his briefcase.

- "Six Man Tag Match": The Miz, Curtis Axel and Ryback vs Dolph Ziggler and The Usos. Xavier Woods, Big E and Kofi Kingston arrive and watch from ringside. Miz tries to distract Ziggler but Ziggler avoids the distraction and hits Ryback with the "Zig Zag" for the pinfall.

- R-Truth vs Bo Dallas: R-Truth rolls Dallas up for the pinfall and the undefeated streak is over! Dallas shakes Truth's hand after the match and accepts defeat. Dallas then snaps and viciously attacks Truth with clubbing forearms then lays Truth out with a double arm DDT.

- Rusev and Lana are in the ring cutting a promo about mother Russia, disrespecting the U.S., president Obama and even former president Bush. Jack Swagger and Zeb Colter arrive and give Rusev and Lana a history lesson on what the American Flag stands for. Swagger rushes the ring and a brawl with Rusev erupts. Rusev throws Swagger into the barricade before going for "The Accolade" in the ring. Swagger reverses into a "Patriot Lock" but Rusev escapes from the ring.

- Kane vs Roman Reigns: Randy Orton attacks Reigns from behind on the way to the ring. Kane and Orton 2 on 1 Reigns. Reigns lays Orton out with the "Superman Punch" but gets choke slammed by Kane. Kane leaves the ring as Orton viciously attacks Reigns with punches, kicks, tossing Reigns into the ring steps, drop DDT'ing Reigns off the barricade and finishes with an "RKO" twice on the announcers table.

- Fandango vs Diego: Layla and Summer Rae come out with Los Matadores. El Torito and the ladies distract Fandango as Diego steals the rollup pinfall. El Torito gores Fandango after the match.

- Backstage Stephanie McMahon knocks on Nikki Bella's locker room door looking for Brie to express herself. Nikki says Brie will express herself too later. Nikki says it's not often that someone like Steph has to eat a plate of crap and she hopes she likes it.

- Another weird Goldust and Stardust promo, looking for the cosmic key.

- Nattie Neidhart and Naomi vs Alicia Fox and Cameron: Naomi makes Cameron tap out to a head scissors submission.

- Chris Jericho vs Seth Rollins: Jericho catches Rollins with a "Code Breaker" as Rollins came off the top rope. The lights go out and a Wyatt clip plays on the titantron. Lights are back on and Jericho is surrounded by Bray Wyatt, Rowan and Harper. Rowan and Harper beat down Jericho to soften him up. Bray hits "Sister Abigail" and stands over Jericho's body.

- Stephanie McMahon is in the ring for another promo. Stephanie is humbled for being arrested and says her kids are scarred by this. Brie Bella arrives and gets in Stephanie's face. Stephanie wants the charges dropped cause she doesn't deserve this. Brie says Stephanie deserves to go to hell. Brie says she'll drop the charges as long as she can have her job back. Stephanie says it's a deal and starts to walk away. Brie stops her and says she's not done. She'll drop the charges with her job back and a match at SummerSlam against Stephanie. Stephanie whines and refuses until finally agreeing, says Brie will be her "bitch" at SummerSlam and slaps Brie in the face. Brie spear tackles Stephanie and we have a cat fight. WWE officials and Triple H rush the ring to seperate both ladies as RAW closes out.

And that wraps up this edition of RAW recap. I'll be back with more RAW action next Tuesday afternoon. Till then, tap or snap.
Posted by nevaRWilliams at 11:30:00 AM